Schwannomas of cranial nerves in the absence of systemic neurofibromatosis are relatively rare. Among these, schwannomas of the trochlear nerve are even less common. They can be found incidentally or when they cause diplopia or other significant neurological deficits. Treatment options include observation only, neuro-ophthalmological intervention, and/or neurosurgical management via resection or sterotactic radiosurgery (SRS). In recent years, the latter has become an attractive therapeutic tool for a number of benign skull base neoplasm including a small number of reports on its successful use for trochlear Schwannomas. However, no treatment algorithm for the management of these tumors has been proposed so far. The goal of this manuscript is to illustrate a case series of this rare entity and to suggest a rational treatment algorithm for trochlear schwannomas, based on our institutional experience of recent cases, and a pertinent review of the literature. Including our series of 5 cases, a total of 85 cases reporting on the management of trochlear schwannomas have been published. Of those reported, less than half (40 %) of patients underwent surgical resection, whereas the remainder were managed conservatively or with SRS. Seventy-six percent (65/85) of the entire cohort presented with diplopia, which was the solitary symptom in over half of the cases (n = 39). All patients who presented with symptoms other than diplopia or headaches as solitary symptoms underwent surgical resection. Patients in the non-surgical group were mostly male (M/F = 3.5:1), presented at an older age and had shorter mean diameter (4.6 vs. 30.4 mm, p < 0.0001) when compared to the surgical group. Twelve patients in the entire cohort were treated with SRS, none of whom had undergone surgical resection before or after radiation treatment. Trochlear schwannoma patients without systemic neurofibromatosis are rare and infrequently reported in the literature. Of those, patients harboring symptomatic trochlear Schwannomas do not form a single homogenous group, but fall into two rather distinct subgroups regarding demographics and clinical characteristics. Among those patients in need of intervention, open microsurgical resection as well as less invasive treatment options exist, which all aim at safe relief of symptoms and prevention of progression. Both open microsurgical removal as well as SRS can achieve good long-term local control. Consequently, a tailored multidisciplinary treatment algorithm, based on the individual presentation and tumor configuration, is proposed. 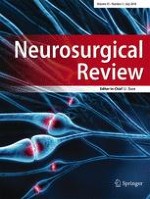 The superior petrosal sinus: a review of anatomy, embryology, pathology, and neurosurgical relevance

Innervation of the blood vessels of the spinal cord: a comprehensive review