Apart from one article published by Rabl and Sigrist in 1992 (Rechtsmedizin 2:156–158), there are no further reports on secondary skull fractures in shots from captive bolt guns. Up to now, the pertinent literature places particular emphasis on the absence of indirect lesions away from the impact point, when dealing with the wounding capacity of slaughterer’s guns. The recent observation of two suicidal head injuries accompanied by skull fractures far away from the bolt’s path gave occasion to experimental studies using simulants (glycerin soap, balls from gelatin) and skull–brain models. As far as ballistic soap was concerned, the dimensions of the bolt’s channel were assessed by multi-slice computed tomography before cutting the blocks open. The test shots to gelatin balls and to skull–brain models were documented by means of a high-speed motion camera. As expected, the typical temporary cavity effect of bullets fired from conventional guns could not be observed when captive bolt stunners were discharged. Nevertheless, the visualized transfer of kinetic energy justifies the assumption that the secondary fractures seen in thin parts of the skull were caused by a hydraulic burst effect. 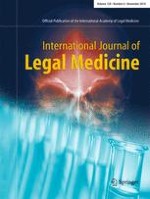