main-content
nach oben
Zurück zum Suchergebnis
​
print
PDF-Version jetzt herunterladen
​
download
Inhaltsverzeichnis
​
insite
Ausgabenarchiv
​
archive
​
insite
Drucken
​
print
» Zum Volltext PDF-Version jetzt herunterladen
Wichtige Hinweise
This article has been retracted from Archives of Osteoporosis by the publisher in order to publish it in Osteoporosis International as originally intended by the authors and the Editors of Osteoporosis International. Springer Nature apologises to readers and the authors. All authors agree to this retraction.
A correction to this article is available online at https://​doi.​org/​10.​1007/​s11657-019-0614-1.

A series of cross-sectional analyses was done using the Danish National Health Service Register. Participants were 50+ adults in the full country Denmark with a MOF between 1995 and 2010. Gender- specific IRs of MOF per 10,000 person years (PYs) were estimated, in addition to IRs of individual fracture sites (hip, vertebrae, humerus, and radius/ulna), and women-to-men IR ratios for MOF.

A general decline was observed in IRs of MOF for the whole population (from 169.8 per 10,000 PYs in 1995, to 148.0 in 2010), which was more pronounced among women. Thirty-one and nineteen percent of decline was observed in hip fracture rates among women and men, respectively. The trend in clinical vertebral fracture was slightly decreasing for women and increasing for men. The women-to-men rate ratio of MOF decreased noticeably from 2.93 to 2.72 during study period.

We observed declining trends in MOF and hip fracture for both sexes. However, a lower rate of decrease of hip fracture and an increasing trend in vertebral fracture was noticed among men. Considering our observations and the major economic burden which accompanies this devastating disease, more attention should be paid to MOF, especially in men. 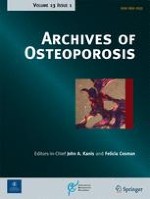