Visual evoked potentials (VEPs) are used to assess visual function in preclinical models of neurodegenerative diseases. VEP recording with epidural screw electrodes is a common method to study visual function in rodents, despite being an invasive procedure that can damage the tissue under the skull. The present study was performed to test a semi-invasive (epicranial) and a non-invasive (epidermal) VEP recording technique, comparing them with the classic epidural acquisition method.

Flash VEPs were recorded from C57BL/6 mice on three separate days within 2 weeks. Waveforms, latencies and amplitudes of the components were compared between the three different methods, utilizing coefficient of repeatability, coefficient of variation and intersession standard deviation to evaluate reproducibility.

These results demonstrate the reliability of semi- and non-invasive VEP recordings, which can be useful to evaluate murine models of neurological diseases. 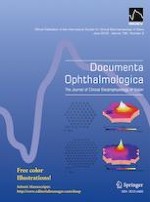 Clinical diagnosis in the era of DNA testing

Reply to: Diagnosing MELAS requires not only an mtDNA variant but also an appropriate phenotype