The aim of this pilot study was to evaluate a new semiautomatic procedure to assess in vivo changes in the crystalline lens and ciliary muscle during accommodation.

A total of 14 subjects were divided into two groups, young (aged between 20 and 25 years) and adult (aged between 35 and 40 years), and measured with an anterior segment optical coherence tomography. A semiautomatic procedure was implemented to measure the central lens thickness (CLT), anterior lens radius (ALR) and the ciliary muscle area (CMA) for the unaccommodated eye and for a vergence of − 3.00 D.

The CLT increase for each population group was smaller than 5%, and the dispersion of each group was similar between them. Contrariwise, the reduction in the ALR was about 30% for both groups, although the young one showed the largest variability. The CMA increase was smaller than 30% for both groups, and the dispersion was similar between them. For each metric, differences between both groups were not statistically significant.

The semiautomatic procedure seems to be useful for the in vivo analysis of the accommodative system. Additionally, the results obtained showed that changes in the CLT were much smaller compared to those obtained for the ALR or CMA. 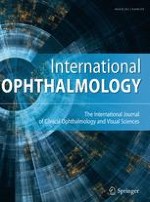 Morphology and morphometry of lacrimal drainage system in relation to bony landmarks in Caucasian adults: a cadaveric study