Sentinel lymph node biopsy (SLNB) is a standard surgical procedure for patients with early breast cancer. The combination of radioisotope (RI) and dye staining is the most accurate method for identification of sentinel lymph nodes (SLN). However, institutions without RI centers perform SLNB by blue dye alone. The identification rate with the dye method alone is inferior to the RI combination method. In our institution, the identification rate of SLNBs by the dye method alone was 95%. So we started this study of SLNB using computed tomographic lymphography (CTLG).

Three hundred twenty-four patients with primary breast cancer and no clinical evidence of lymph node metastasis were studied. Identification of SLN was performed by CTLG and the dye-staining method. The identification rate of SLNs was analyzed for relation with the clinicopathological findings.

The SLN identification rate was 98.5% with CTLG and 98.8% when combined with the dye-staining method. The identification rate with CTLG was significantly lower in the initial cases. CTLG identified the SLNs in all cases 6 months after its induction. Multi-route multi-SLN patterns, in which SLNs were easily missed by the dye method, were detected in 9.6% of the patients. There was a significant difference in the SLN metastasis rates; partial enhancement of the SLN with CTLG had the consequence that the metastasis-positive rate was high.

The SLN identification rate was improved by combining the dye-staining method and CTLG. CTLG has a superior spatial resolution activity for detecting SLNs precisely; making CTLG available for the prediction of metastases has been suggested. It is possible to perform SLNB with high accuracy by using CTLG in the institutions that do not have RI.
Anzeige 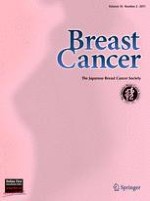 Alteration of immunohistochemical biomarkers between pre- and post-chemotherapy: hormone receptors, HER2 and Ki-67

The microtubule as a breast cancer target