From 2010 to 2014, 957 patients were included. Among the 419 patients from the cN0 group treated with SLN alone, one axillary relapse occurred during the follow-up. Among pN1 group patients, with successful mapping, 103 had a negative SLN. The FNR was 11.9% (95% CI 7.3–17.9%). Multivariate analysis showed that residual breast tumor size after NAC ≥ 5 mm and lympho-vascular invasion remained independent predictors for involved ALND. For patients with initially involved node, with negative SLN after NAC, no lympho-vascular invasion and a remaining breast tumor size 5 mm, the risk of a positive ALND is 3.7% regardless the number of SLN removed. 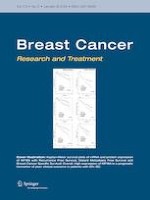 Efficacy of neoadjuvant pertuzumab in addition to chemotherapy and trastuzumab in routine clinical treatment of patients with primary breast cancer: a multicentric analysis

One year versus a shorter duration of adjuvant trastuzumab for HER2-positive early breast cancer: a systematic review and meta-analysis