The epidemiological scenarios of hepatitis E virus (HEV) and hepatitis A virus (HAV) infections have changed in the last few decades, but precise epidemiological data on the prevalence of anti-HEV and anti-HAV, alone or in combination, in the general population are scanty. We investigated HEV and HAV seroprevalence comparing two population samples living in Northern (Abbiategrasso, Milan) and Southern Italy (Cittanova, Reggio Calabria), the latter being characterized by a poorer socio-economic level and hygienic/sanitary conditions. Based on census records, we randomly enrolled and tested 3,365 subjects (Abbiategrasso, n = 2,489; Cittanova, n = 876) aged 18–75 years for anti-HAV and anti-HEV. Anti-HAV (71.3 % vs 52.5 %) and anti-HEV (17.8 % vs 9.0 %) prevalence rates were higher in Southern Italy (both p < 0.001). Most anti-HEV-positive subjects also had anti-HAV. Subjects testing positive for anti-HAV, alone or with anti-HEV, were older (p < 0.001 in both populations) and showed a trend toward declining prevalence in the youngest birth cohorts. The prevalence of subjects with a positive result for anti-HEV alone did not change in birth cohorts in the two towns. Detection of anti-HEV was independently associated with anti-HAV, town, birth cohort, and education level in multivariate analysis. Low socio-economic level and hygienic/sanitary conditions are associated with high HAV and HEV seroprevalence rates in Italy. Recent improvements, especially in the South, have led to a declining prevalence of anti-HAV, alone or with anti-HEV. Seroprevalence of HEV alone is uniformly low and does not change in birth cohorts born between 1938 and 1993. 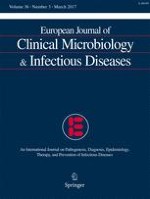 Plasmid-mediated quinolone resistance in Enterobacteriaceae: a systematic review with a focus on Mediterranean countries

Utility of oropharyngeal real-time PCR for S. pneumoniae and H. influenzae for diagnosis of pneumonia in adults

Is it possible to prevent recurrent vulvovaginitis? The role of Lactobacillus plantarum I1001 (CECT7504)

Clinical outcomes of extended versus intermittent administration of piperacillin/tazobactam for the treatment of hospital-acquired pneumonia: a randomized controlled trial