Seroepidemiology of parvovirus B19 in the Frankfurt am Main area, Germany: evaluation of risk factors | springermedizin.de Skip to main content
TOOLBAR 1 2 3 4
SUCHE MENÜ 1 2 3 4

Parvovirus B 19 is a virus that is distributed by respiratory droplets. It is known to be an initiator of erythema infectiosum (children’s fifth disease), with erythroblasts being the target cells of infection. In case of vertically transmission, hydrops fetalis has been documented.

The seroprevalence of parvovirus B19 in patients admitted to the University Hospital in Frankfurt a.M. was, on average, lower than that among the general population in Germany. Infection among patients in specific risk groups did not spread more than that in age-matched non-selected patients, with the exception of the group of immunocompromised patients. 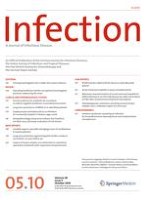 Turning hand hygiene into a habit: the need is obvious

Candida rugosa: a possible emerging cause of candidaemia in trauma patients

Posttraumatic ankle arthritis due to a novel Nocardia species