This study was set to investigate whether serum markers of lymphocytic activity are associated with patient-reported outcomes in Sjögren’s syndrome (SS). Forty-six patients with SS were included in this cross-sectional study. Patients with monoclonal gammopathy, history of malignant lymphoma, or with secondary SS were excluded. Serum levels of IgG, β2-microglobulin (β2M), soluble interleukin-2 receptor (sIL2-R), and free light chains (FLC) were assessed. Systemic disease activity was measured by the EULAR SS disease activity index (ESSDAI). Patient-reported symptoms were recorded by visual analogue scales (VAS) of pain, fatigue, and dryness, as compiled in the EULAR SS patient-reported index (ESSPRI). Depressive symptoms were determined by the Patient Health Questionnaire 9 (PHQ-9). Serum concentrations of κFLC (r = 0.491, p = 0.001), λFLC (r = 0.326, p = 0.027), and β2M (r = 0.421, p = 0.004) correlated with the ESSDAI, whereas sIL-2R and IgG did not. No correlations between serum markers of lymphocytic activity and the ESSPRI, or single VAS measures of pain, dryness, or fatigue, were found. In patients with VAS fatigue scores in the upper quartile, sIL-2R serum levels were even decreased (p = 0.019). Only depressive symptoms as determined by PHQ-9 were positively correlated with fatigue (r = 0.536, p < 0.001). In this well-defined cohort of patients with SS, serological lymphocytic activity was not correlated with patient-reported outcomes and sIL-2R levels were even decreased in patients with high fatigue scores. Only depressive symptoms were correlated with fatigue. This highlights the need to further understand the link between inflammation and disease characteristics in SS. 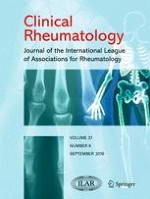 Comparison of splinting and Kinesio taping in the treatment of carpal tunnel syndrome: a prospective randomized study

Effects of glucosamine in patients with osteoarthritis of the knee: a systematic review and meta-analysis