In Egypt, pneumococcal vaccines have not yet been introduced as being compulsory. Identification of the circulating serotypes in Egypt is mandatory to determine whether or not the pneumococcal vaccines will be beneficial. The current study aims to identify the serotypes, vaccine coverage, and antimicrobial resistance of Streptococcus pneumoniae colonizing the nasopharynx of Egyptian children younger than 5 years old. The study was conducted in two successive winter seasons (December 2012–February 2013 and December 2013–February 2014). Two hundred children were enrolled, aged from 6 months to 5 years, excluding those with fever, signs of infection, history of antibiotic intake, and hospitalization in the preceding month. Nasopharyngeal (NP) secretions were collected, subjected to culture, and underwent antibiotic susceptibility testing if positive for pneumococci. Real-time polymerase chain reaction (PCR) and serotyping by sequential multiplex PCR for positive cases were included as well. Streptococcus pneumoniae was isolated from 62 subjects. All isolates were sensitive to vancomycin and levofloxacin, but the majority showed resistance to multiple antibiotics. PCR was positive for pneumococci in 113 subjects (56.5%). The most commonly detected serotypes (st) were 6A6B6C (n = 21, 20.8%), 19F (n = 19, 18.8%), 1 (n = 11, 10.9%), 34 (n = 8, 7.9%), and 19A (n = 6, 5.9%). The theoretical coverage of the PCV13 vaccine for the detected serotypes was 72.4%, while that of PCV10 was 65.5%. Based on these percentages, we recommend including pneumococcal conjugate vaccines in the Egyptian national vaccination program. 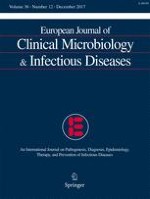 Contribution of echocardiography in the diagnosis of definitive infective endocarditis: the infectious disease specialist’s point of view