For the prevention of nutritional rickets, 400 IU vitamin D daily and circulating 25-hydroxyvitamin D (25OHD) concentrations > 50 nmol/L are recommended, whereas the toxicity threshold is set at 250 nmol/L. We synthesized the evidence for the effect of vitamin D supplementation on incremental 25OHD in infants up to 1 year of age.

We performed a systematic review and meta-analysis of intervention trials in several databases. A total of 87 records were identified for full-text review and 27 articles with 61 studies were included in the final analysis. 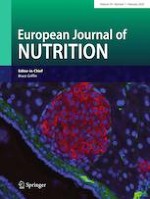 Genotypes of HLA, TCF7L2, and FTO as potential modifiers of the association between sweetened beverage consumption and risk of LADA and type 2 diabetes

Curcuma supplementation in high-fat-fed C57BL/6 mice: no beneficial effect on lipid and glucose profile or prevention of weight gain

Correction to: Evaluation of the efficacy of Lactobacillus plantarum HEAL9 and Lactobacillus paracasei 8700:2 on aspects of common cold infections in children attending day care: a randomised, double-blind, placebo-controlled clinical study