Although survivors of Fontan palliation for a single ventricle are known to have lower cardiac index than patients with two-ventricle surgical reconstructions, it is unclear whether two frequently observed sequelae, short stature and protein-losing enteropathy (PLE), have hemodynamic origins. A serum marker that reflects hemodynamic status would be a tremendous asset in the long-term management of children with these sequelae. The authors recently noted severely reduced total alkaline phosphatase (TALP) levels in two children with early-onset PLE after Fontan operations, both of whom had low cardiac output at cardiac catheterization. Catheter-based or surgical interventions that rapidly increased cardiac output in these two patients resulted not only in relief of PLE but also in a prompt TALP rise. To examine whether the apparent correlation of low TALP with impaired cardiac output also is seen in Fontan patients without PLE, this study retrospectively examined the TALP data from two other Fontan patients who underwent cardiac catheterization specifically to assess the potential benefit of vasodilator therapy. The TALP levels were abnormally low in both cases but increased after uptitration of angiotensin-converting enzyme inhibition. Serum TALP activity, an indicator of osteoblastic function particularly in preadolescence, may be a marker of low cardiac output after a Fontan operation. 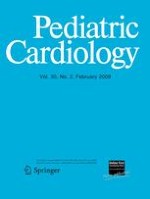 Multidetector Computed Tomography of the Ring–Sling Complex in an Infant

Thrombus in a Coronary Artery Aneurysm Shortly After Warfarin Withdrawal