The treatment of type 2 diabetes with full peroxisome proliferator-activated receptor gamma (PPARγ) agonists improves insulin sensitivity, but is associated with weight gain, heart failure, peripheral oedema and bone loss. Endotrophin, the C-terminal fragment of the α3 chain of procollagen type VI (also called Pro-C6), is involved in both adipose tissue matrix remodelling and metabolic control. We established a serum assay for endotrophin to assess if this novel adipokine could identify type 2 diabetic patients who respond optimally to PPARγ agonists, improving the risk-to-benefit ratio.

The BALLET trial (NCT00515632) compared the glucose-lowering effects and safety of the partial PPARγ agonist balaglitazone with those of pioglitazone in individuals with type 2 diabetes on stable insulin therapy. The per protocol population (n = 297) was stratified into tertiles based on baseline endotrophin levels. Participants were followed-up after 26 weeks, after which correlational analysis was carried out between endotrophin levels and measures of glucose control. This is a secondary post hoc analysis.

Endotrophin was significantly associated with therapeutic response to balaglitazone and pioglitazone. At week 26, only individuals in the upper two tertiles showed significant reductions in HbA1c and fasting serum glucose compared with baseline. The OR for a 1% and a 0.5% reduction in HbA1c for individuals in the upper two tertiles were 3.83 (95% CI 1.62, 9.04) p < 0.01, and 3.85 (95% CI 1.94, 7.61) p < 0.001, respectively. Endotrophin levels correlated with adipose tissue mass, insulin resistance and fatty liver index. Notably, PPARγ-associated adverse effects, such as moderate-to-severe lower extremity oedema, only occurred in the lower tertile. 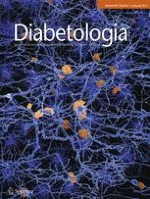 Dementia onset, incidence and risk in type 2 diabetes: a matched cohort study with the Fremantle Diabetes Study Phase I

Depression: a common and burdensome complication of diabetes that warrants the continued attention of clinicians, researchers and healthcare policy makers

Mitochondria-related transcriptional signature is downregulated in adipocytes in obesity: a study of young healthy MZ twins

ACCORDION MIND: results of the observational extension of the ACCORD MIND randomised trial