There is a need to better understand the characteristics of systemic inflammation in the pathophysiology of OSA so that we can better assess and treat OSA patients and comorbid conditions. S-Ferritin, a marker of systemic inflammation, is a commonly measured biomarker in clinical practice. Previous studies have shown that subjects with OSA have higher levels of circulating pro-inflammatory cytokines, especially in severely obese patients but little is known about the association between S-Ferritin and OSA.

Ferritin is an intracellular iron storage protein and a marker of inflammation. Studies have shown that subjects with obstructive sleep apnea (OSA) have higher levels of circulating pro-inflammatory cytokines, but little is known about the association between ferritin and OSA. The aims of the study were to evaluate serum ferritin (S-Ferritin) levels in OSA patients compared to levels in the general population and also examine the effect of obesity level and treatment with positive airway pressure (PAP) on S-Ferritin levels.

The OSA subjects (n = 796) were part of the Icelandic Sleep Apnea Cohort. The control subjects (n = 637) were randomly chosen Icelanders who participated in an epidemiological study. Propensity score (PS) methodologies were employed to minimize selection bias and strengthen causal inferences when comparing non-randomized groups. S-Ferritin levels were measured and all participants answered the same detailed questionnaire about sleep and health. Only OSA patients underwent a sleep study and were re-invited for a 2-year follow-up.

S-Ferritin levels are comparable in OSA patients and controls and do not change consistently with obesity level or PAP treatment in our sample. 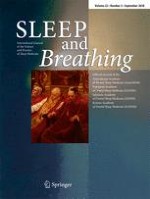 Daytime napping and risk of type 2 diabetes: a meta-analysis of prospective studies