Heavy proteinuria caused by non-diabetic renal disease (NDRD) is common in type 2 diabetes mellitus (T2DM). The aim of this study was to investigate specific predictors for NDRD in addition to traditional indicators in T2DM.

A total of 341 patients with T2DM who underwent renal biopsy were retrospectively included. Eligible patients were divided into a nephrotic-range group (n = 194) and a non-nephrotic-range group (n = 147) based on proteinuria level. Risk factors for NDRD were evaluated using logistic regression, and the diagnostic implications of these variables were assessed by subgroup.

At different levels of proteinuria, reduced IgG and increased C3 levels were independent indicators of NDRD in T2DM. Insights into these factors will help to advance the clinical management of NDRD. 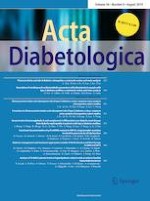 Association of smoking and cardiometabolic parameters with albuminuria in people with type 2 diabetes mellitus: a systematic review and meta-analysis