Patients with severe burns are susceptible to infectious complications including burn-site infections and sepsis. The purpose of this study was to explore the pathologic development of burn injury in a mouse model and to screen genes dysregulated at different time points on the basis of gene expression microarrays. Differential expression analysis identified a total 223 genes that related to only time progression independent of burn injury and 214 genes with aberrant expression due to burn injury. Weighted gene co-expression network analysis (WGCNA) of the 214 genes obtained seven gene modules which named as red, blue, turquoise, green, brown, yellow, and gray module, and the blue module was found to be significantly associated with severe burn injury progression, and in which several genes were previously reported being associated with inflammation and immune response, such as interleukin IL-6, IL-8, and IL-1b. Functional enrichment analysis indicated significant enrichment of biological processes that related to metabolism and catabolism, and pathways of proteasome, notch signaling and cell cycle. This result supports a phase progression of severe burn with gene expression changes and interpretation of biological processes in mouse. 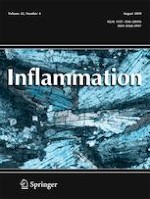 The Deleterious Impact of Interleukin 9 to Hepatorenal Physiology