Survival after pancreatic head adenocarcinoma surgery is determined by tumor characteristics, resection margins, and adjuvant chemotherapy. Few studies have analyzed the long-term impact of postoperative morbidity. The aim of the present study was to assess the impact of postoperative complications on long-term survival after pancreaticoduodenectomy for cancer.

Of 294 consecutive pancreatectomies performed between January 2000 and July 2011, a total of 101 pancreatic head resections for pancreatic ductal adenocarcinoma were retrospectively analyzed. Postoperative complications were classified on a five-grade validated scale and were correlated with long-term survival. Grade IIIb to IVb complications were defined as severe.

Postoperative severe morbidity per se had no impact on long-term survival except in patients with R1 tumor resection. These results suggest that severe complications after R1 resection predict poor outcome. 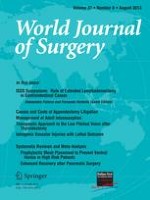 Extended Lymphadenectomy in Patients With Pancreatic Cancer Is Debatable