In the present study, we examine whether the relationships between country of origin or reason for migration and mortality differ between men and women.

Relative to their Swedish counterparts, migrants from Nordic and East European (EU) countries and former Yugoslavia have higher mortality. This excess mortality among migrants relative to Swedes is more pronounced in men than in women. Migrants from Western and Southern European countries; Iran, Iraq, and Turkey; Central and South America; and Asia, have lower mortality than Swedes, and the size of the mortality reduction is similar in both sexes. The predictive effects of the reason for migration for mortality are also similar in migrant men and women.

This study provides little support for the hypothesis of a double survival advantage among immigrant women in Sweden. However, it does show that the excess mortality in migrants from Nordic and EU countries and former Yugoslavia relative to the Swedish-born population is more pronounced in men than in women. 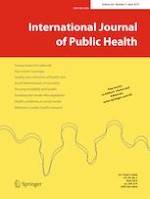 Roll-your-own cigarette use in Italy: sales and consumer profile—data from PASSI surveillance, 2015–2016

Identifying diabetes cases in health administrative databases: a validation study based on a large French cohort

Childhood vaccination in Kenya: socioeconomic determinants and disparities among the Somali ethnic community