Sex estimation is a task of utmost importance in forensic anthropology and bioarcheology. Along with the pelvic bone, the skull is the most important source of sexual dimorphism. On the human skull, the upper third of the face (i.e., the frontal bone) is one of the most significant sexually dimorphic structures useful in anthropological research, especially when studied by methods of virtual anthropology. This study was focused on sex estimation using the form and shape of the external surface of the frontal bone with or without the inclusion of its sinuses. The study sample consisted of 103 cranial CT images from a contemporary Czech population. Three-dimensional virtual models of the frontal bones and sinuses were analyzed using geometric morphometrics and multidimensional statistics: coherent point drift-dense correspondence analysis (CPD-DCA), principal component analysis (PCA), and support vector machine (SVM). The whole external frontal surface was significantly different between males and females both in form and shape. The greatest total success rate of sex estimation based on form was 93.2%, which decreased to 86.41% after crossvalidation, and this model identified females and males with the same accuracy. The best estimation based on shape reached a success rate of 91.26%, with slightly greater accuracy for females. After crossvalidation, however, the success rate decreased to 83.49%. The differences between sexes were significant also in the volume and surface of the frontal sinuses, but the sex estimation had only 64.07% accuracy after crossvalidation. Simultaneous use of the shape of the frontal surface and the frontal sinuses improved the total success rate to 98.05%, which decreased to 84.46% after crossvalidation. 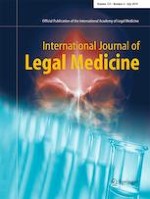 Microdeletion at 8q24.13 rather than multistep microsatellite mutation resulting in the genetic inconsistency at the D8S1179 locus in a true trio