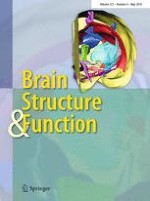 Synaptic competition in the lateral amygdala and the stimulus specificity of conditioned fear: a biophysical modeling study

The hippocampal to prefrontal cortex circuit in mice: a promising electrophysiological signature in models for psychiatric disorders

Is the brain really a small-world network?

Erratum to: Neurons in the lateral part of the lumbar spinal cord show distinct novel axon trajectories and are excited by short propriospinal ascending inputs