Sleeve gastrectomy (SG) has been used as a multipurpose surgical procedure for the treatment of morbid obesity. The aim of the study was to analyze gastric morphology and histology at two different time points after SG in rats.

For both time periods, the Co groups exhibited the highest body weight, while the rats undergoing the SG showed the lowest weight gain (P < 0.05). Initially, significant differences (P < 0.005) in food intake relative to body weight were observed between the Co rats and animals undergoing surgery, which disappeared thereafter. The actual total stomach size after both experimental periods in the SG group was similar to that of non- and sham-operated rats mainly due to a forestomach enlargement, which was more pronounced after 16 weeks. Traits of gastritis cystica profunda characterized by gastric foveolae elongation with hyperplasia and cystic dilatation of the glands were observed in the residual stomachs of the sleeve-gastrectomized rats. These findings were mostly observed after 16 weeks of performing the SG, although they were also detected occasionally following 4 weeks postoperatively. No intestinal metaplasia was observed.

After SG gastric macro- and microscopic changes with functional implications in both the short and long term take place. 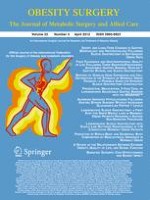 Lean and Fat Mass Loss in Obese Patients Before and After Roux-en-Y Gastric Bypass: A New Application for Ultrasound Technique