There are many methods of treating Legg–Calvé–Perthes disease, including operative and nonoperative methods. Femoral varus osteotomy is one of the surgical methods used to treat this disease, and it involves changing the alignment of the proximal femur to improve containment of the femoral epiphysis in the acetabulum. The aims of this study were to evaluate the results of femoral varus osteotomy for the treatment of Perthes disease according to various classification and grading schemes, as well as to compare the results to those obtained using other methods of treatment reported in the literature.

According to the results of the present study, proximal femoral varus osteotomy gives good results in children between the ages of 6 and 10 years without any femoral head deformity and flattening, especially with good containment in abduction. 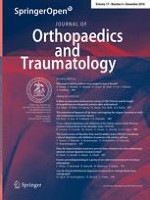 Indications for prophylactic osteosynthesis associated with curettage in benign and low-grade malignant primitive bone tumors of the distal femur in adult patients: a case series

Hip surgery and its evidence base: progress over a decade?

The anterolateral ligament of the knee: unwrapping the enigma. Anatomical study and comparison to previous reports