The online version of this article (doi:10.​1007/​s13402-014-0199-z) contains supplementary material, which is available to authorized users.
Qing Wu, Yong-Feng Chen and Jie Fu have contributed equally to this research.

Deregulation of centromere protein (CENP)-A, a centromere-specific histone variant, has in the past been linked to cancer initiation and progression. Additionally, our previous work has shown that CENP-A upregulation predicts a poor overall survival in patients with lung adenocarcinoma. The aim of this study was to uncover the biological role of CENP-A in lung adenocarcinoma growth and invasion, including its underlying molecular mechanisms.

CENP-A expression was knocked down in human lung adenocarcinoma A549 and PC-9 cells using a short hairpin RNA (shRNA) technology. Subsequently, the effects of this knock down on the proliferation, apoptosis, cell cycle progression, colony formation, migration, invasion and tumorigenicity were assessed. Additionally, Western blot analyses were performed to examine concomitant expression changes in key proteins involved in cell cycle regulation and apoptosis.

We found that shRNA-mediated knock down of CENP-A significantly inhibited the in vitro proliferation and colony formation of A549 and PC-9 cells as compared to control shRNA-transfected cells. In addition, CENP-A down-regulation was found to induce G0/G1 cell cycle arrest and apoptosis, and to inhibit the in vitro migration and invasion of A549 and PC-9 cells. Down-regulation of CENP-A was also found to significantly suppress the in vivo growth of xenografted A549 cells. At the protein level, we found that the expression of p21, p27, CHK2 and Bax was markedly increased and that the expression of CCNG1, Skp2, Cks1 and Bcl-2 was markedly decreased in CENP-A down-regulated cells. 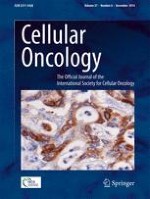