We tested the hypothesis that exposure to a short-term (1 h) increase in intraluminal pressure and shear stress (SS), to mimic two mechanical signals associated with a bout of exercise, improves nitric oxide (NO)-mediated endothelium-dependent dilation in aged soleus muscle feed arteries (SFA). In addition, we hypothesized that pressure and SS would interact to produce greater improvements in endothelial function than pressure alone.

SFA from young (4 months) and old (24 months) Fischer 344 rats were cannulated and pressurized at 90 (P90) or 130 (P130) cmH2O and exposed to no SS (0 dyn/cm2) or high SS (~65 dyn/cm2) for 1 h. At the end of the 1 h treatment period, pressure in all P130 SFA was set to 90 cmH2O and no SS (0 dyn/cm2) for examination of endothelium-dependent [flow and acetylcholine (ACh)] and endothelium-independent [sodium nitroprusside (SNP)] dilation. To evaluate the contribution of NO, vasodilator responses were assessed in the presence of Nω-nitro- l -arginine (L-NNA).

These results indicate that short-duration increases in pressure + SS improve NO-mediated endothelium-dependent dilation in aged SFA; however, pressure and SS do not interact to produce greater improvements in endothelial function than pressure alone. 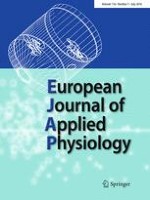