The purpose of this study was to determine the outcomes in patients treated with robotically assisted patello-femoral arthroplasty (PFA).

The early retrospective data for robotically-assisted PFA show encouraging results. Advantages of this technique include a smaller incision, faster rehabilitation, preservation of bone stock, and implantation without malalignment. 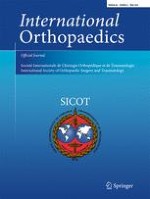 The use of traction for treating femoral shaft fractures in low- and middle-income countries: a systematic review

Acetabular dysplasia may be related to global joint hyperlaxity