Esophagojejunostomy (EJS) represents the most difficult steps during totally laparoscopic total gastrectomy (TLTG). Over the past few years, several techniques have been developed. This study aimed to evaluate the feasibility and surgical outcomes of the laparoscopic intracorporeal side-to-side EJS during TLTG used to treat malignant disease of the stomach.

In this study, 56 totally laparoscopic gastrectomies (TLGs) (83.6%) and 11 totally laparoscopic degastrogastrectomies (TLDGs) (16.4%) with intracorporeal side-to-side EJS were performed. The average operating time was 249 min (range, 195–349 min). The average time required for both anastomoses was 44 min (17.7% of the average total time). The conversion rate was 10.4%, and the reoperation rate was 13.4%. The mean hospital stay was 12.4 days (range, 8–45 days). The major complications comprised four anastomotic leakage (6%), five postoperative bleeding (7.5%), and two duodenal stump leakage (3%). Most of the patients (91%) were enteral fed on day 6. The mean time for closure of leaks was 12 days (range, 4–18 days). The minor complications comprised two esophagojejunal anastomotic strictures (3%) subsequently treated by endoscopic dilatation. There was one death (1.5%), which occurred within 45 postoperative days.

Laparoscopic intracorporeal side-to-side EJS is a safe and feasible technique. It represents a valid method for performing a reconstruction of the digestive tract in laparoscopic surgery after TLG, especially in presence of a narrow esophagus. 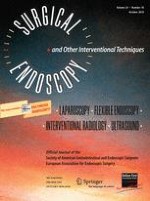 Laparoendoscopic rendezvous: an effective alternative to a failed preoperative ERCP in patients with cholecystocholedocholithiasis