From June 2010 to June 2015, 40 patients presenting with Hinchey III peritonitis from perforated diverticulitis underwent LPL or RPA. Patients with Hinchey II or IV peritonitis and patients who underwent an upfront Hartmann procedure were excluded. Primary endpoint was overall 30-day or in-hospital postoperative morbidity after surgical treatment of peritonitis.

LPL for perforated diverticulitis is associated with a high risk of inadequate intra-abdominal sepsis control requiring a Hartmann procedure in up to 25 % of patients. RPA appears to be safer and more effective. It may represent the best option in this context. 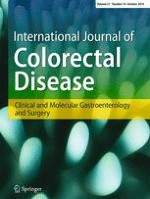 The important risk factor for lateral pelvic lymph node metastasis of lower rectal cancer is node-positive status on magnetic resonance imaging: study of the Lymph Node Committee of Japanese Society for Cancer of the Colon and Rectum

Robot-assisted versus laparoscopic surgery for lower rectal cancer: the impact of visceral obesity on surgical outcomes

Differences between colon and rectal cancer in complications, short-term survival and recurrences