We sought to explore the normal myocardial signal density (SD) levels during multidetector computed tomography coronary angiography (MDCT-CA) acquisitions and evaluated the impact of beam hardening artifacts. Background: Since myocardial perfusion by MDCT is based on the myocardial signal density (SD), it is pivotal to determine the normal values of myocardial SD and to identify potential mechanisms of misinterpretation of perfusion defects. In routine MDCT acquisitions, we commonly visualize a considerable SD drop at the posterobasal wall resembling perfusion defects, being attributed to beam hardening artifacts. Consecutive asymptomatic patients without history of coronary artery disease (CAD) and low probability of CAD who were referred for MDCT evaluation at our institution due to inconclusive or discordant functional tests constituted the study population. Perfusion defects were defined as a myocardial segment having a SD two standard deviations below the average myocardial SD for the 16 left ventricular American Heart Association (AHA) segments. Thirty six asymptomatic patients constituted the study population. Myocardial SD was evaluated in 576 American Heart Association (AHA) segments and 36 posterobasal segments. The mean myocardial SD at the posterobasal segment was 53.5 ± 35.1 HU, whereas the mean myocardial SD at the basal, mid and apical myocardium was 97.4 ± 17.3, with significant differences (p < 0.001) between posterobasal and all AHA segments. Posterobasal “perfusion defects” were identified in 26 (72%) patients. The only variable associated to the presence of posterobasal SD deficit was the heart rate (61.8 ± 6.2 bpm vs. 56.3 ± 8.1 bpm, p = 0.04), whereas body mass index, blood SD of the left and right ventricles, contrast-to-noise ratio, and the extent of atherosclerosis were not related to the presence of “perfusion defects”. In an asymptomatic population with no history of coronary artery disease, a myocardial signal density deficit mimicking a perfusion defect is a common finding in the posterobasal wall and is not related to body mass index or scan quality. 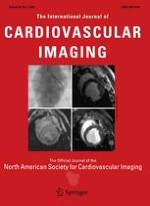