Few studies have been conducted on the relations between T1-weighted signal intensity changes in the pediatric brain following gadolinium-based contrast agent (GBCA) exposure.

The purpose of this study is to investigate the effect of multiple administrations of a macrocyclic GBCA on signal intensity in the globus pallidus and dentate nucleus of the pediatric brain on unenhanced T1-weighted MR images.

Quantitative analysis evaluation of globus pallidus:thalamus and dentate nucleus:pons of the pediatric brain demonstrated an increase after serial administrations of macrocyclic GBCA. Further research is necessary to fully understand GBCA pharmacokinetic in children. 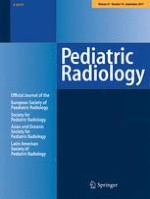 Imaging of thoracic tuberculosis in children: current and future directions

A systemic review of tuberculosis with HIV coinfection in children

Intrathoracic tuberculous lymphadenopathy in children: a guide to chest radiography