To investigate whether there is an increased signal intensity (SI) of dentate nucleus (DN) and globus pallidus (GP) on unenhanced T1-weighted magnetic resonance imaging (MRI), in patients who had undergone multiple administrations of gadoxetate disodium.

We retrospectevely included stage III melanoma patients, who had been previously enrolled in a trial of adjuvant therapy and who had undergone whole-body contrast-enhanced MRIs with gadoxetate disodium every three months for their follow-up. The SI ratios of DN-to-pons and GP-to-thalamus on unenhanced T1-weighted images were calculated. The difference in SI ratios between the first and the last MRI examinations was assessed and a linear mixed model was performed to detect how SI ratios varied with the number of administrations.

Eighteen patients were included in our study. The number of gadoxetate disodium administrations ranged from 2 to 18. Paired t-test did not show any significant difference in DN-to-pons (p=0.21) and GP-to-thalamus (p=0.09) SI ratios by the end of the study. DN-to-pons SI ratio and GP-to-thalamus SI ratio did not significantly increase with increasing the number of administrations (p=0.14 and p=0.06, respectively).

Multiple administrations of gadoxetate disodium are not associated with increased SI in DN and GP in the brain. 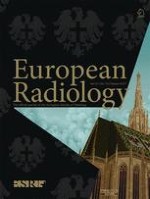 Bacterial contamination of ultrasound probes in different radiological institutions before and after specific hygiene training: do we have a general hygienical problem?