Recently, a non-invasive fetal electrocardiogram monitor has been approved for clinical usage in labour and delivery. To determine the fetal signal quality of vaginal breech deliveries in comparison with a case–controlled cephalic group during labour.

This case–control study was carried out at the Department of Obstetrics and Gynecology of the University Hospital Frankfurt between 1st July 2012 and 30th September 2012. A total of seven breech deliveries were evaluated. A case–controlled cephalic group with same gestational age and parity were selected from a previous trial. 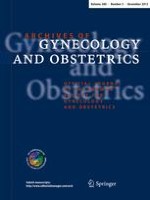 Management of acute hydrocephalus due to pregnancy with ventriculoperitoneal shunt

Polymorphisms in MTHFR, MTHFD, and PAI-1 and recurrent miscarriage among North Indian women

Copeptin concentrations are not elevated in gestational diabetes mellitus