The significance of beaten copper appearance (BCA) on skull radiographs in children following surgery for isolated sagittal craniosynostosis has not been studied. This study was designed to look for any correlation between BCA and symptoms suggestive of intracranial hypertension in this group of patients.

Forty-eight consecutive children, who were operated for isolated sagittal synostosis from1987 to 2000 and had postoperative skull radiographs, were included. Patients were divided into: (a) BCA group (n = 20), consisting of children who had beaten copper appearance on skull radiographs at last follow up, and (b) Non-BCA group (n = 28), consisting of children who did not have this finding. Records were reviewed to look for symptoms suggestive of intracranial hypertension, such as headache, head banging, and irritability.

This study suggests a significant number of children with BCA on radiographs develop symptoms suggestive of raised ICP following surgical treatment in infancy and prolonged follow up may be warranted in this group of patients. 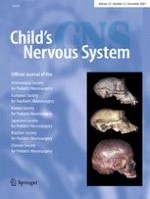 Distraction osteogenesis in the surgical treatment of craniostenosis: a comparison of internal and external craniofacial distractor devices

Visual function in nonsyndromic craniosynostosis: past, present, and future

A. A. Cohen-Gadol, D. D. Spencer (eds) The legacy of Harvey Cushing—profiles of patient care