During the 29-month study, a total of 201 consecutive LC + IO-ERCPs were performed. The mean age of patients was 55 ± 19 years and 67% were female. The mean intervention time was 105 ± 44 min. The total LOS was 4 (3,  7) days and the post-operative LOS was 2 (1,  3) days. A total of 6 (3%) patients experienced post-interventional pancreatitis and two (1%) patients suffered a Strasberg type A bile leak. All patients were successfully discharged. 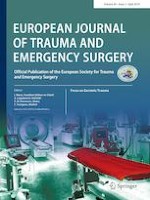 Analysis of quality of life after major trauma: a spanish follow-up cohort study

Decision-making for complex scapula and ipsilateral clavicle fractures: a review

The implementation of a clinical pathway enhancing early surgery for geriatric hip fractures: how to maintain a success story?