Simultaneous determination of diquat and its two primary metabolites in rat plasma by ultraperformance liquid chromatography–tandem mass spectrometry and its application to the toxicokinetic study | springermedizin.de Skip to main content
SUCHE MENÜ 1 2 3 4

This study aimed to develop and validate an ultraperformance liquid chromatography–tandem mass spectrometry to simultaneously determine diquat (DQ) and its two primary metabolites in rat plasma and its application to the toxicokinetic study.

Diquat (DQ) is a non-selective contact herbicidal active ingredient used as a general herbicide to control weeds. At least 60 cases of DQ poisoning worldwide were reported in scientific literature [1]. DQ commonly targets the kidney, causing tubular necrosis in patients with DQ poisoning. Brain involvement of DQ poisoning has been reported recently in a lethal DQ poisoning case [2]. The toxicokinetics of DQ, especially its main metabolites, are still unclear.
Fuke et al. [3] reported that DQ could be metabolized to DQ monopyridone (DQ-M) and DQ dipyridone (DQ-D) in rats and poisoned patients. There have been a few developed methods for determination of DQ in non-biological samples [4‐6] or biological samples [7‐9]. Oulkar et al. [5] developed a liquid chromatography-tandem mass spectrometry (LC–MS/MS) method for the determination of the residues of DQ in various fruit matrices. Tsao et al. [9] published a method for simultaneous determination of DQ and other three herbicides in postmortem blood and urine by LC–MS/MS. However, there was no method that could simultaneously determine DQ and its two primary metabolites in plasma by LC–MS/MS.
Anzeige
In this study, we aimed to develop a fast ultraperformance liquid chromatography (UPLC) –MS/MS method for the determination of DQ and its two primary metabolites in rat plasma. Then, this study was applied to the toxicokinetic study in rats after intragastric administration of DQ. To the best of our knowledge, this is the first trial to study the toxicokinetics of DQ and its two primary metabolites.

DQ, DQ-D, DQ-M and paraquat-d8 (internal standard: IS) were obtained from J&K Scientific Ltd. (Shanghai, China). The chemical structures of DQ, DQ-D, DQ-M and IS are shown in Fig. 1. The purities of all standards were above 95.0% (HPLC). Acetonitrile, methanol, formic acid and ammonium acetate of LC–MS grade were purchased from Sigma-Aldrich (St. Louis, MO, USA). Ultrapure water was prepared in our laboratory by ELGA LabWater system (ELGA Veolia, Bucks High Wycombe, UK).
×

Preparation of the standards and quality control samples

All frozen rat plasma samples were thawed at room temperature and vortex mixed. An aliquot of 50 μL of plasma was pipetted into a 1.5 mL Eppendorf tube. Then, 50 μL of IS working solution was added and vortex mixed. Then, 150 μL acetonitrile was added, vortex mixed and centrifuged at 2000 × g for 5 min. Then, 20 μL clear upper layer was diluted with 80 μL ultrapure water. Finally, 10 μL of clear upper layer was injected into the UPLC–MS/MS system.

The method validation was performed according to European Medicines Agency (EMA) guidelines and US Food and Drug Administration (FDA) guidelines for the validation of bioanalytical methods [10, 11].

Linearity and lower limit of quantification

Calibration standards with DQ/IS, DQ-D/IS and DQ-M/IS at seven concentrations in blank rat plasma were extracted and analyzed by UPLC–MS/MS. Each calibration curve plotted by the area ratio (y) of analyte/IS versus the nominal concentration (x) was analyzed individually with a weighting factor of 1/x2. The linearity was evaluated over a range of 3.0–3000 ng/mL for DQ, 0.9–900 ng/mL for DQ-D and 0.3–300 ng/mL for DQ-M, respectively. A correlation coefficient (r) value > 0.99 was desirable. The LLOQs for DQ, DQ-D and DQ-M in rat plasma samples were defined as the lowest concentration at least ten times the response compared to the blank response.

All protocols were approved by the Animal Care and Ethical Committee of Nanjing Medical University. Six Sprague–Dawley rats (male, 200 ± 15 g, 6–8 weeks, Oriental BioService Inc., Nanjing, China) were housed in a fixed cycle of 12 h light–dark facility with access to standard food and water. Each rat received an intragastric administration of DQ (dissolved in normal saline) at the dose of 11 mg/kg. Whole blood samples were collected from the suborbital vein into 1.5 mL Eppendorf tubes containing Na-heparin anticoagulant before dosing (0.0 h) and at 0.0833, 0.25, 0.5, 0.75, 1, 1.5, 2, 4, 6, 8, 12, 24, 36 h after dosing. Blood samples were centrifuged at 2,000 × g at 4 °C for 10 min. The plasma was separated and stored at  – 70 °C until use. The mean pharmacokinetic parameters were calculated by DAS 2.0 software (Chinese Pharmacological Association, China).
Anzeige

DQ is a commonly used herbicide that kills both weeds and grasses because of its rapid action and low production cost. A few cases of human poisoning were reported worldwide mainly due to intentional ingestion of the liquid formulations [1]. It is well known that the kidney is the main injury organ in the DQ poisoning. Central pontine myelinolysis has been found recently in a lethal DQ poisoning case, which indicated that the potential for pontine damage should be aware of in patients with DQ poisoning [2].
The methods for determination of DQ have been developed for application in non-biological samples, such as cowpea, fruit and drinking water [4‐6], and in biological samples, such as whole blood, serum, postmortem blood and urine [7‐9]. All of these methods are limited to the detection of DQ and cannot simultaneously detect its metabolites. To the best of our knowledge, there are only two published studies which determined DQ and its two metabolites in biological materials by high-performance liquid chromatography (HPLC) [3, 12]. Both methods were developed using HPLC technology, which was less sensitive than LC–MS/MS.
As far as we know, the toxicokinetics of DQ-M and DQ-D have not been reported yet. To conduct toxicokinetic studies on DQ, DQ-M and DQ-D, a simultaneous analysis method of these analytes was first developed by UPLC–MS/MS. The ion intensities of DQ, DQ-M and DQ-D are all higher in ESI-positive mode than negative mode. DQ, DQ-M and DQ-D show the main singly charged cation m/z at 183.1, 199.1 and 215.0 (Fig. S1), respectively. Finally, the quantification m/z transitions of 183.1 → 156.6, 199.1 → 155.1 and 215.0 → 171.3 and qualification m/z transitions of 183.1 → 129.5, 199.1 → 78.3 and 215.0 → 153.3 were chosen for monitoring DQ, DQ-M and DQ-D, respectively (Table 1).
Anzeige
The IS should have similar behavior in terms of retention time, ionization effect, and mass spectrometer response when compared to the analytes. Generally, isotope label IS is the most ideal candidate for biological sample analysis by LC−MS/MS. However, Suzuki et al. [13] pointed out that there was a risk that DQ was produced from DQ-d4 by undergoing a deuterium–hydrogen exchange reaction and it could lead to misdetection of DQ. Therefore, in this study, paraquat-d8, a stable isotope-labeled internal standard, was selected as a desirable IS due to its similar chromatographic behavior and mass response with the analytes.
The toxicokinetic studies of DQ, DQ-M and DQ-D were performed after intragastric administration of DQ in rats. The plasma concentration–time profile showed that DQ could be rapidly absorbed after intragastric administration with the Tmax of 0.6 h. The Tmax of DQ-M (0.5 h) was closed with DQ, which meant that DQ-M could be produced quickly by metabolism of DQ in rats. The Tmax of DQ-D (1.6 h) was longer than those of both DQ and DQ-M, which indicated that DQ-D was gradually generated by DQ or DQ-M. The Cmax ratios were 0.05 for DQ-M/DQ and 0.25 for DQ-D/DQ, respectively. The maximum concentration of DQ-D in rats was 5.2 times higher than that of DQ-M, which meant that DQ-D was the primary metabolite of DQ. The t1/2 ranged from 8.2 to 25.1 h for DQ, DQ-M and DQ-D. The biodistributions of DQ-M and DQ-D were not carried out in this study which  will be studied in our future research.

In this study, we developed and fully validated a rapid and reliable method for the determination of DQ and its two primary metabolites in rat plasma by UPLC−MS/MS. This method was successfully applied to the toxicokinetic studies of DQ, DQ-M and DQ-D in rats. For the first time, the toxicokinetics of DQ and its two primary metabolites was simultaneously evaluated in rats after intragastric administration of DQ at the dose of 11 mg/kg. DQ-D is the main metabolite of DQ in rats, and the maximum concentration is 5.2 times higher than that of DQ-M.

All animal care and handling procedures used in this study were approved by the Animal Care and Ethical Committee of Nanjing Medical University.
Open AccessThis article is licensed under a Creative Commons Attribution 4.0 International License, which permits use, sharing, adaptation, distribution and reproduction in any medium or format, as long as you give appropriate credit to the original author(s) and the source, provide a link to the Creative Commons licence, and indicate if changes were made. The images or other third party material in this article are included in the article's Creative Commons licence, unless indicated otherwise in a credit line to the material. If material is not included in the article's Creative Commons licence and your intended use is not permitted by statutory regulation or exceeds the permitted use, you will need to obtain permission directly from the copyright holder. To view a copy of this licence, visit http://​creativecommons.​org/​licenses/​by/​4.​0/​. 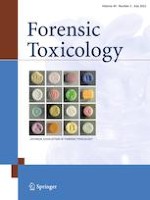 Histological paraffin-embedded block: a good alternative specimen to detect the use of opiates at least 20 years ago