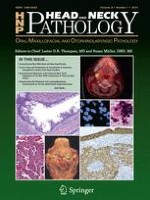 Apocrine Hidrocystoma of the Lower Lip: A Case Report and Literature Review

Among Sinonasal Tumors, CDX-2 Immunoexpression is not Restricted to Intestinal-Type Adenocarcinomas

Neuroendocrine Neoplasms of the Head and Neck: Some Suggestions for the New WHO Classification of Head and Neck Tumors