The present study investigated the effects of first degree relatives’ fractures on fracture incidence after the menopause. Sister’s, but not other relatives’, wrist or hip fracture history was associated with increased risk of fragility fractures after the menopause. This suggests genetic predisposition to bone fragility among postmenopausal women.

The aim of the present study was to investigate the association between first degree relatives’ fractures and perimenopausal bone fragility.

The study sample of 971 perimenopausal women was extracted from randomly selected Kuopio Osteoporosis Risk Factor and Prevention cohort and measured with dual X-ray absorptiometry in femoral neck (FN) in baseline (1989–1991), in 5 years (1994–97), and in 10 years (1999–2001). All low-trauma energy fractures during the 10-year follow-up were recorded based on self-reports and validated from medical records. First degree relatives’ history of life-time hip and wrist fractures (exact classification or trauma energy not specified) was questioned by postal inquiries.

There was a significant correlation between fathers’ vs. brothers’ and mothers’ vs. sisters’ fractures (p < 0.01 in Pearson bivariate correlations). Sister’s, but not mother’s, father’s, or brother’s wrist and hip fractures were associated with significantly lowered 10-year fragility fracture-free survival rate (HR = 0.56, p = 0.006). Sisters’ or other relatives’ fractures were not associated with FN bone loss rate or bone mineral density (BMD) in the follow-up measurements (p = NS in ANCOVA). The predictive power of BMD for fragility fractures differed according to sisters’ fracture history: Baseline FN T score predicted fracture-free survival only among women without sisters’ fracture history (HR 0.62, p < 0.001 vs. women with sisters’ fracture in Cox regression).

In conclusion, sisters’ fracture history is associated with 10-year fracture-free survival in perimenopausal women but not with BMD or its changes. Predictability of fragility fracture risk with BMD may depend on sister’s fracture history. This may indirectly suggest genetic predisposition to bone fragility independently of BMD. 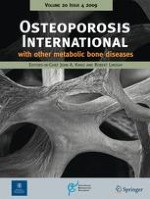 Persistence with teriparatide in postmenopausal osteoporosis; impact of a patient education and follow-up program: the French experience

Heritability of impaired balance: a nationwide cohort study in twins