In children with sensorimotor dysfunction (SMD), a history of sleeping disorder can be regularly recorded. Many children describe the following sleeping disorders: they need light or at least an open door. Additionally, a parent is needed. They often use soft toys, which are built around them like a wall in order to have close physical contact. In the dark they are afraid because they feel ghosts, a presence or simply a monster under the bed or in the room. Sensorimotor dysfunction (SMD) is a functional disorder of the movement system caused by reversible segmental dysfunctions, mostly in several sensory regions. The SMD is manifested not only through gross and fine motor weaknesses but also through behavioral problems. The SMD is diagnosed using the motocybernetic test (MCT). The symptom of behavioral sleeping disorder is highlighted, especially since it is a general problem both in healthy children and in children with behavioral problems, such as SMD, attention deficit hyperactivity disorder (ADHD) or autism spectrum disorders (ASD). As a therapeutic alternative, the possibilities of manual medicine are emphasized, especially atlas therapy according to Arlen, since the complaints will disappear completely after just a few treatment sessions. 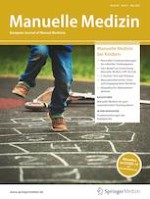