No differences were observed in demographic variables, pre-operative outcome scores, and ROM measures between groups. Six weeks post-operatively, there was no statistically significant difference in the outcome variables. Four months post-operatively, statistically significant differences were only observed in KOOS Jr. (79 and 73.6; p = 0.05), and FJS (59.9 and 45.5; p < 0.01); all of which favoured the control group. There was no difference in the outcome variables at 12 months. 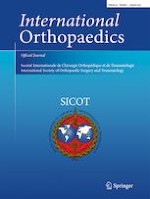 The Ponseti method of treatment for neuromuscularand syndromic (non-idiopathic) clubfeet: evaluation of a programme-based approach at a mean follow-up of 5.8 years