This study investigated self-efficacy (self-perceived and rated by an informant) as a mediator of the relationship between social network variables (including network size, frequency of social contacts, satisfaction with social contacts and social support) and cognitive impairment. Participants were 189 adults with a mean age of 75 years, 32 of whom suffered from mild cognitive impairment (MCI), 39 from early stage Alzheimer’s disease (AD) and 118 who had no cognitive impairment. Binary logistic regression and linear regression models were used to assess the association between the predictor variables and cognitive impairment, controlling for several confounders. Network size was significantly associated with the cognitive status (mini mental status examination; β = 0.15, p < 0.05) and with odds of cognitive impairment (odds ratio [OR]: 0.96, 95% confidence interval [CI]: 0.93–0.99). General self-efficacy rated by the informant mediated this relationship in both analyses. Possible underlying mechanisms, including neuroendocrine reactivity and health behavior are discussed. 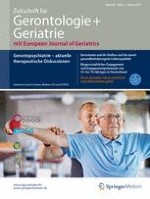