Clinical experience and previous studies indicate that low socioeconomic positions are overrepresented in trauma populations. The reason for this social variation in injury risk is likely to be multifactorial. Both individual and environmental sources of explanation are plausible to contribute. We investigated the impact of the influence of socioeconomic factors and co-morbidity on the risk of becoming a trauma victim in a case–control study including 7,382 trauma patients matched in a one to five ratio with controls matched by age-, gender- and municipality from a level 1 trauma centre. Data from the trauma cohort were linked to national registries. Associations between socioeconomic factors and co-morbidity were estimated by conditional logistic regression. The trauma patients had been treated for psychiatric, substance abuse and somatic diagnoses to a higher extent than the controls. In the conditional logistic regression analysis a low level of education and income as well as co-morbidity (divided into psychiatric, substance abuse and somatic diagnoses) were all independent risk factors for trauma. Analysing patients with an injury severity score >15 separately did not alter the results, except for somatic diagnoses not being a risk factor. Recent treatment for substance abuse significantly increased the risk for trauma. Low level of education and income as well as psychiatric, substance abuse and somatic co-morbidity were all independent risk factors for trauma. Active substance abuse strongly influenced the risk for trauma and had a time dependent pattern. These insights can facilitate future implementation of injury prevention strategies tailored to specific risk groups. 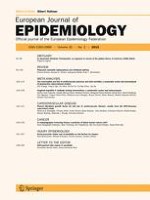 Tea consumption and risk of cardiovascular outcomes and total mortality: a systematic review and meta-analysis of prospective observational studies