Socioeconomic Status and Health Behaviors in Adolescence: A Review of the Literature | springermedizin.de Skip to main content
SUCHE MENÜ 1 2 3 4

The goal of this review was to determine the direction of associations between SES and health behaviors during the period of adolescence.

We searched the PsychInfo and Pubmed databases for studies that measured the association between SES and cigarette smoking, alcohol consumption, marijuana use, diet, and physical activity in adolescents between 10- and 21-years old.

Results from this review indicate that, although some associations between SES and health behaviors exist during adolescence, the associations are not as robust as those in adulthood. Efforts to curb poor diet, inactivity, and smoking behaviors should target low SES adolescents, whereas efforts to curb teen drinking and marijuana use may be useful across the SES spectrum.
Anzeige 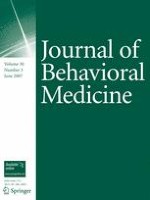 Physical Activity Behavior Change in Middle-aged and Older Women: The Role of Barriers and of Environmental Characteristics