We report a case of a 57-year-old male patient presenting with a painful mass in the popliteal fossa of the left knee, while the X-ray being unremarkable, MRI suggested a paraarticular lesion such as an inflamed paraarticular ganglion. A biopsy showed a poorly differentiated metastasis of a papillary thyroid carcinoma, the patient had been operated on 8 years ago. This case emphasizes that in patients with malignancies such as papillary thyroid carcinomas long-term courses (over years) with several phases of tumor spread occur finally leading to filiae in any location. Thus, in such patients, a metastatic lesion even in unusual places such as the periarticular soft tissue should be included in the differential diagnosis. 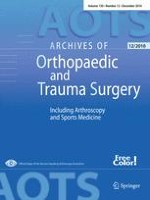 Inter- and intra-observer reliability of the Cobb angle in the measurement of vertebral, local and segmental kyphosis of traumatic lumbar spine fractures in the lateral X-ray

Spinal osteochondroma: a report on six patients and a review of the literature