Despite predominant microsatellite instability (MSI) in intestinal-type gastric carcinomas, we found the most frequent MSI in solid-type poorly differentiated adenocarcinoma (PDA). Although this tumor is classified as PDA, it is hypothesized to possess peculiar features among PDAs. The present study aimed to clarify the clinicopathological and molecular characteristics of this tumor.

We examined the expression of p53, mismatch-repair proteins, and mucin core glycoproteins; microsatellite status; and mutations in KRAS and BRAF, as well as clinicopathological features, in 54 cases of PDA of the stomach (31 solid-type PDAs and 23 non-solid-type PDAs). 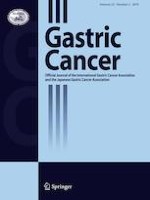