Beta-human chorionic gonadotropin (HCG-β) is considered to be a useful tumor marker for germ cell tumors (GCTs); however, various tumors other than GCTs, including cystic pituitary adenomas, Rathke’s cleft cysts, and craniopharyngiomas, were reported to express HCG-β.

We herein present the case of a 5-year-old boy who presented with polyuria and had a solitary lesion in the neurohypophysis with a positive HCG-β titer in the cerebrospinal fluid. Under a preoperative diagnosis of germinoma, a biopsy was performed from the posterior pituitary lobe via the transsphenoidal endoscopic approach and the histological diagnosis was revealed to be Langerhans cell histiocytosis (LCH).

The finding of a slightly positive HCG-β titer in the cerebrospinal fluid (CSF) cannot exclude the possibility of LCH, and we strongly recommend a histological diagnosis for the diagnosis of a solitary neurohypophysial lesion. 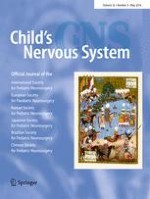 25th Congress of the European Society for Pediatric Neurosurgery (ESPN) Paris-France, 8-11 May 2016