These studies determined whether the acetylcholinesterase inhibitors, donepezil and galantamine, both of which are approved for the treatment of cognitive deficits in Alzheimer’s disease, can prevent or reverse spatial memory deficits in mice induced by cyclophosphamide and doxorubicin, cytotoxic agents commonly used to treat breast cancer.

Spatial memory declined during and following weekly injections of cyclophosphamide and doxorubicin, and was unaltered when the acetylcholinesterase inhibitors were administered following the manifestation of chemotherapy-induced deficits. In contrast, spatial memory of mice receiving the acetylcholinesterase inhibitors concurrent with chemotherapy did not differ from that at baseline.

Results indicate that chemotherapy-induced spatial memory deficits in mice can be prevented, but not reversed by the use of acetylcholinesterase inhibitors concomitant with chemotherapy, suggesting that these agents should be investigated further for the prevention of chemobrain. 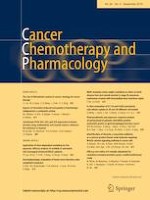 Correction to: Population pharmacokinetics of PF‑05280014 (a trastuzumab biosimilar) and reference trastuzumab (Herceptin®) in patients with HER2‑positive metastatic breast cancer

Cytochrome P450 3A4, 3A5, and 2C8 expression in breast, prostate, lung, endometrial, and ovarian tumors: relevance for resistance to taxanes

A phase 1b, multicenter, open-label, dose-finding study of eribulin in combination with carboplatin in advanced solid tumors and non-small cell lung cancer

Efficacy and safety of 4-weekly cabazitaxel for castration-resistant prostate cancer: a multi-institutional study