Four indexes including lifespan expectancy at birth (LEB), infant mortality rate (IMR), under-5 mortality rate (U5MR) and crude mortality rate (CMR) at county level in China were calculated. The spatial distribution patterns of these indexes were illustrated. Meanwhile, spatial regressive model was applied to explore the relations between major macroeconomic determinants and these indexes.

Geographical factors should be highly considered, and the L–L LEB or H–H IMR/U5MR clustered areas need to be integrated as a whole to formulate public health and economic development plans. 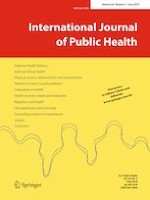 Correction to: The education gradient in cancer screening participation: a consistent phenomenon across Europe?

The invisible wounds of five decades of armed conflict: inequalities in mental health and their determinants in Colombia

What is the role of smartphones on physical activity promotion? A systematic review and meta-analysis