Optimal efficacy of a macromolecular prodrug requires balancing the rate of drug release with the rate of prodrug elimination. Since circulating macromolecules have different elimination rates in different species, a prodrug optimal for one species will likely not be for another. The objectives of this work were (a) to develop an approach to optimize pharmacokinetics of a PEG~SN-38 prodrug in a particular species, (b) to use the approach to predict the pharmacokinetics of various prodrugs of SN-38 in the mouse and human, and (c) to develop a PEG~SN-38 conjugate that is optimized for mouse tumor models.

We developed models that describe the pharmacokinetics of a drug released from a prodrug by the relationship between the rates of drug release and elimination of the prodrug. We tested the model by varying the release rate of SN-38 from PEG~SN-38 conjugates in the setting of a constant prodrug elimination rate in the mouse. Finally, we tested the antitumor efficacy of a PEG~SN-38 optimized for the mouse.

Optimization of a PEG~SN-38 prodrug was achieved by adjusting the rate of SN-38 release such that the ratio of t1/2,β of released SN-38 to the t1/2 of prodrug elimination was 0.2–0.8. Using this approach, we could rationalize the efficacy of previous PEGylated SN-38 prodrugs in the mouse and human. Finally, a mouse-optimized PEG~SN-38 showed remarkable antitumor activity in BRCA1-deficient MX-1 xenografts; a single dose gave tumor regression, suppression, and shrinkage of massive tumors.

The efficacy of a macromolecular prodrug can be optimized for a given species by balancing the rate of drug release from the carrier with the rate of prodrug elimination. 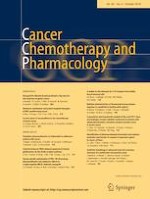 A pilot study of first-line olaratumab, doxorubicin and ifosfamide in patients with metastatic soft tissue sarcoma

A two centers study of postoperative adjuvant chemotherapy with S-1 versus SOX/XELOX regimens for gastric cancer after D2 resection: a cohort study