A Marknell DeWitt and J Lidholm are employed by Thermo Fisher Scientific (Uppsala, Sweden), manufacturer of the IgE assay system used in this study. The other authors reported no possible competing interest.

Fish is an important cause of food allergy. Studies on fish allergy are scarce and in most cases limited to serological evaluation. Our objective was to study patterns of self-reported allergy and tolerance to different commonly consumed fish species and its correlation to IgE sensitization to the same species.

Median age of onset of fish allergy was 8.5 years. Severe reactions were reported by the majority of patients (n = 20 (53%) respiratory and of these 20 patients, 6 also had cardiovascular symptoms). After diagnosis, 66% of the patients had eliminated all fish from their diet. Allergy to all species ever tried was reported by 59%. In relation to species ever tried, cod (84%) and herring (79%) were the most frequently reported culprit species while hake (57%) and swordfish (55%) were the least frequent. A positive sIgE (value ≥ 0.35 kUA/L) to the culprit species ranged between 50% (swordfish) and 100% (hake). In tolerant patients, a negative sIgE (value < 0.35 kUA/L) ranged from 0% (hake, pollock and swordfish) to 75% (sardine). For cod, the agreement between sIgE test results and reported allergy or tolerance was 82% and 25%, respectively. Sensitization to cod parvalbumin (Gad c 1) was present in 77% of all patients. 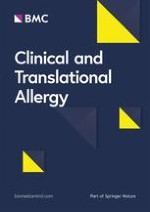 Sustained efficacy and safety of a 300IR daily dose of a sublingual solution of birch pollen allergen extract in adults with allergic rhinoconjunctivitis: results of a double-blind, placebo-controlled study

Dietary elimination of children with food protein induced gastrointestinal allergy – micronutrient adequacy with and without a hypoallergenic formula?