Detection of urinary parasites is relatively rare and incidental finding in routine urine examination. Common urinary parasitic infections as described in literature include Trichomonas, Schistosoma hematobium and Microfilaria. Trichomonas vaginalis is known to cause vaginitis and urethritis, and may be found in urine sediments. In this study, the spectrum of urinary parasitic infections that had been reported in the last one and a half year was evaluated, and point prevalence in this zone was estimated. Microbiologist opinion had been taken in the difficult cases. Out of the total centrifuged urine sediments examined, urinary parasitic infection was found in 33 cases. The calculated point prevalence is 0.39%. Most common parasitic infection reported was flagellates (27 cases: 25 T. vaginalis, 2 commensal flagellate closest to Chylomastix), followed by three cases showing eggs of Enterobius vermicularis, one case showing larvae of Strongyloides stercoralis and two cases of ciliate protozoa. One of the ciliate protozoa was Balantidium coli and the other one was Balantidium like ciliate morphologically closest to Chilodonella spp. Pyuria was found in 22 out of the 33 cases and hematuria in 17 out of 33 cases. A fairly wide morphological spectrum of parasites may be diagnosed through microscopic examination of centrifuged urine sediment. They may cause pyuria and haematuria, and morphological awareness helps in prompt and effective management in most cases. 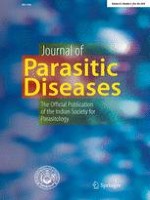